Transgender individuals face rampant discrimination in nearly every aspect of their lives. One of the most dangerous areas of discrimination is being denied access to health care.

As currently written, the Americans with Disabilities Act explicitly excludes transsexualism as a disability, thus allowing discrimination on this basis in public and private insurance. However, health care providers recognize Gender Identity Disorder, or GID, as a medical condition.

Both public and private insurance providers routinely classify transgender status as a pre-existing condition exempt from treatment, or classify gender-confirming treatments as cosmetic or elective because they seek to change anatomy that is consider normal and functional, ignoring the reality that these procedures treat a medically recognized, treatable condition. “Gender-confirming care” refers to any procedure that helps a transgender person realize his or her authentic gender. These might include hormone treatment or sexual reassignment surgery, or both. For transgender patients, procedures that would otherwise be deemed elective or cosmetic are key to their physical and mental health. For example, facial feminization surgery is frequently necessary for transgender women (people assigned “male” at birth who identify as women) to be able to realize their identities as women, but this is a nearly identical procedure to elective plastic surgeries that are not normally covered by insurance.

More perniciously, transgender individuals who have documents with corrected gender markers are routinely denied coverage for both preventative and life-saving treatments that appear to be gender-incongruent. Gender-incongruent procedures are procedures typically required by people who have a different gender marker. For example, a transgender woman who receives a prostate examination might be denied coverage because “women don’t have prostates.” Or conversely, a health care man getting a pap smear may be denied coverage because “men don’t have vaginas.” These denials create insurance nightmares due to apparent gender-incongruence that would be avoidable with sensible public policy.

As lawmakers review Affordable Care Act accessibility guidelines, they have the chance to modify insurance laws and rectify this discrimination. By using California’s Insurance Gender Nondiscrimination Act as a model, federal lawmakers can improve access to medical care for transgender people by securing explicit protections for gender-confirming and gender-incongruent procedures.

One transgender man living in a jurisdiction that does not require surgery to correct a driver’s license obtained one and other ID with the appropriate gender marker and name. Some years after he had corrected his ID, he sought a double mastectomy. He desired it as gender-confirming care, and there was a history of breast cancer in his family (specifically his grandfather) for which the procedure would serve as prophylaxis. If he had applied for a double mastectomy before his paperwork had been corrected, he would have been applying for a “female” procedure as a person with “female” documents. As it was, his documents indicated that a mastectomy would be a gender-incongruent procedure and was therefore not covered, even though the history of breast cancer in his family was specifically male.

This is exactly the sort of bureaucratic absurdity that burdens both transgender patients and the health care system generally. This man’s double mastectomy served two medically sound purposes. First, it functioned as well-established preventative care for breast cancer. Second, it was appropriate treatment for his GID. However, because his plan excluded any transition-related surgical procedures, a procedure that served both a transition-related purpose and a cancer-preventative purpose was not covered. A gender congruency check on his doctor’s order showed a mismatch for a mastectomy, since men are not approved for breast cancer preventative treatment because their risk factors do not make that treatment reasonable for insurers to take on.

Patients are left in insurance-coding hell and bureaucratic limbo, fighting appeals for denials of coverage for medically sound care. These denials and their subsequent appeals end up costing insurance companies money investigating the claims, and cost doctors and patients time and money trying to get pre-approval for care that should be routinely approved. In the case of low-cost preventative care procedures, such as pap smears, the cost of appeals can end up being more expensive than the procedure itself. Doctors who are savvy about providing care to transgender insureds use creative coding to ensure that their patients receive the care they need without the hassle of triggering automatic denials that gender-confirming procedures generate.

California is the only state in the nation to recognize this persistent problem. In 2005 lawmakers passed the Insurance Gender Nondiscrimination Act. It does not mandate that providers cover any specific treatments. It does, however, require that if a benefit, treatment or procedure would be covered for any person on the plan, it must cover every person on that plan regardless of the insured’s gender.

This “equality framework” was recently made explicit and enacted in California’s Department of Insurance regulations, which specifically prohibit discrimination based on an insured’s or prospective insured’s actual or perceived gender identity or transgender status in four aspects of insurance: (1) limiting or denying access to insurance policies; (2) demanding additional payments or premiums; (3) designating gender identity or transgender status as a pre-existing condition that would limit coverage; and (4) denying or limiting coverage of gender-incongruent procedures and gender-confirming care if such care would otherwise be covered and available.

The equality framework establishes a baseline granting all people access to medically necessary care regardless of their gender, gender identity or transgender status. The ACA passed with certain nondiscrimination provisions, including nondiscrimination on the basis of gender. Unfortunately “gender” has not yet been defined in federal law to include actual or perceived gender identity or transgender status. The absence of such a definition leaves transgender people vulnerable to ongoing discrimination despite the ACA’s apparent protection.

A federal equality framework based on the one outlined in the recently enacted California Department of Insurance regulations would ensure that the ACA, passed to make health care more equitable and accessible for all Americans, truly covers all Americans without discrimination.

Kate Walsham is a 3L student at UC-Hastings College of the Law and editor in chief of the Hastings Women’s Law Journal. She is currently an intern at the San Francisco public defender’s office, and previously worked at the Transgender Law Center and the National Center for Lesbian Rights in San Francisco.

BACK TO SCHOOL! Not seeing clients...
Please check my SERVICES page for a list of fabulous referrals!

To ORDER Herban Elixirs go to my SHOP page
or EMAIL herbanelixirs@gmail.com 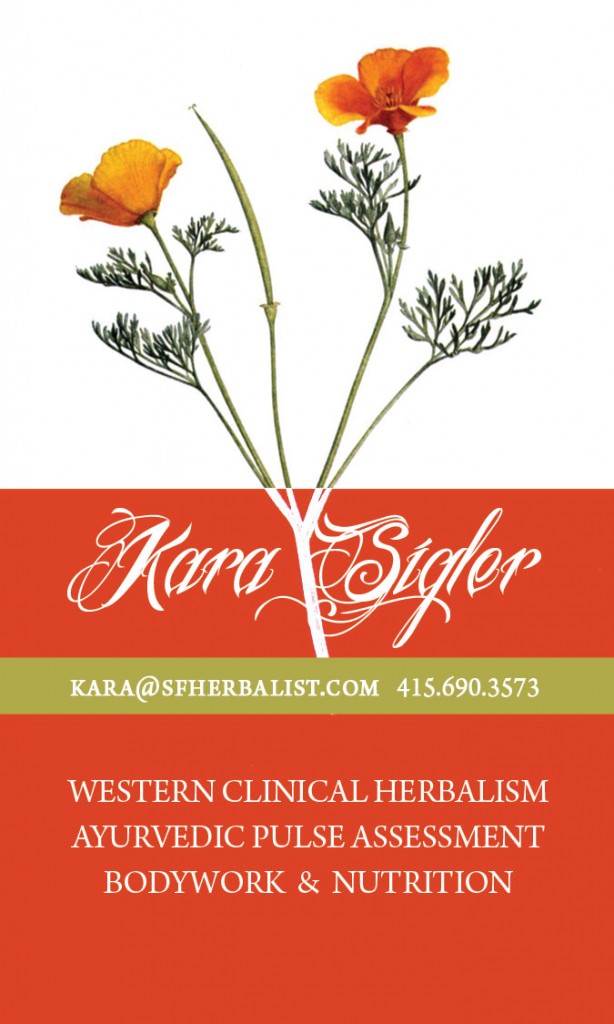